Margaret Boland entered the Convent of Mercy at Ennis, Ireland in 1866 at the age of twenty. Twenty eight years later, now known as Mother Mary Mechtildes, she would embark with five other Sisters of Mercy on the S.S. Taupo from Hokitika in order to set up a presence in Christchurch at the invitation of Bishop Grimes. After a journey of fifty hours, the steamer arrived at Lyttleton on July 25th and the sisters were installed in their first home in Manchester Street where they were warmly welcomed by Father Le Menant and Father Marnane and the ladies of the parish.

Reverend Mother Mechtildes was a woman of vision and highly resourceful. She wanted not just a school but also a convent in Christchurch and she quickly realised that the Manchester Street site would be too small. On All Souls day 1894 she secured part of the Town Reserves 19 and 40 for the sum of 1,300 pounds and subsequent purchases in 1900 and 1907 secured the final Colombo Street property. A two storey wooden convent was built with a sturdy brick wall. The wall remains today and is the oldest heritage structure on the site. The sisters moved into their new convent on December 1st 1894 and the building would remain until 1919. The convent chapel would be the first stone building on the site.

Mother Mary Mechtildes wanted a chapel which would not only be beautiful but also the spiritual heart of the order and through patience and a keen business acumen she set about achieving her goal. During her time in England, she had spent much time at the Sisters of Mercy convent at Handsworth, Birmingham and she greatly admired the chapel here. The Handsworth chapel was the work of John Hardman, founder of the Hardman metalworks studio and his friend  A.W.N. Pugin, acknowledged leader of the Gothic Revival movement in England. The men had a strong business and personal relationship and their creative talents and craftsmenship were renown throughout the British Empire. Mother Mary Mechtildes could not have chosen a better model for her chapel in New Zealand.

The architects tasked with making Mother Mary Mechtildes’s dream a reality were Alfred and Sydney Luttrell who were the builders of choice for the Catholic Church in New Zealand and Tasmania. They would build five churches for the Catholic diocese. Two other surviving examples of their work are the Theatre Royal and the Royal Exchange Building in Cathedral Square. Sydney Luttrell would donate the window to St Cecilia, indicating a strong personal connection with the building.  The foundation stone was laid in March 1910 and on the 26th of February 1911  Bishop Grimes opened and blessed the chapel. Built in Early English Gothic Revival ecclesiastical style, the exterior uses Halswell stone edged with contrasting Oamaru stone with a category II classification from Heritage New Zealand.

Acquisition of the windows was a long process. Mother Mary Mechtildes had a keen eye for detail and was exacting in her dealings with Hardmans.

On December 9th 1909 she wrote “ I forwarded to you today the plan of our future chapel and should feel obliged for your letting me know the price of an altar and windows suited to a chapel such as we are about to build. May I ask you to describe them very minutely.

March 23rd 1910 “The windows you described are very nice indeed and no doubt the price is reasonable but an expert in these matters told me yesterday that the expense of getting out would make each window double the price you named. This expense I cannot go to at the moment. Would it be possible for you to let us have the same subjects got up in a way that would allow you to give them to us at about half the price already named? I am sorry for the trouble I am obliged to give you but being anxious to have our chapel pretty and having only a certain sum at my disposal I cannot help but rely on you to suggest the best means of overcoming the difficulty.”

11 July 1911 “We like the windows and are very grateful for the way you arranged about them. We may be able to show our gratitude by inducing other Sisters to give you orders … in your letter of May 6th 1910 you said you would allow us a discount of 5% on the prices quoted”

April 21st 1913 ‘the windows arrived safe though we had some trouble caused by their having only Christchurch, New Zealand painted on the cases ‘

July 10 1913 “ I shall only add that I shall feel grateful to you for seeing that the four windows open for ventilation like the last two, also that they are properly addressed’
[Source: Birmingham City Council archives] 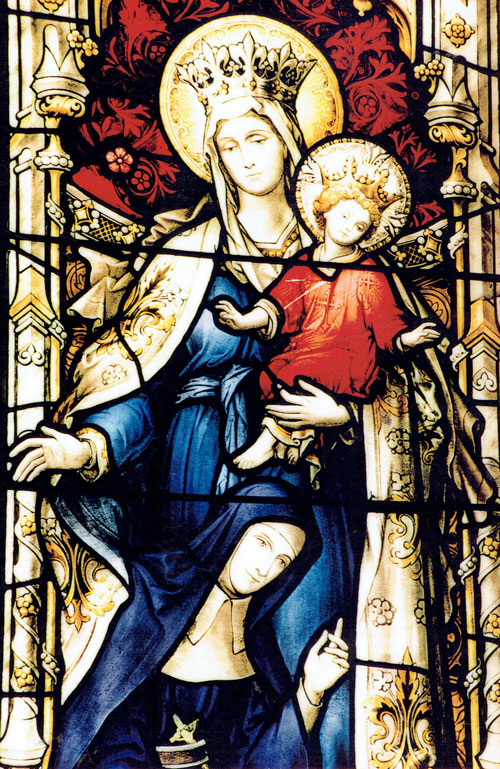 Her determination to have the windows as perfect as they could be even extended to the depiction of the Order’s foundress Catherine McAuley in the Our Lady of Mercy window to the right of the altar. A photograph of Catherine was sent to Hardman’s and the first rendering rejected as it was deemed to not  be an accurate representation of the foundress. Patiently over a period of three years Mother Mary Mechtildes filled her chapel with eleven stunning Pugin stained glass windows which has left Christchurch with one of the largest collections of this kind of Victorian antique glass in the country. The rose window which inspired the current name of the chapel contains many Puginian emblems. The themes of faith, learning and music which were dear to the hearts of the Sisters of Mercy are represented in many different ways in the chapel and it is a rare example of a building built by women which also celebrates female as well as the traditional male saints.

The chapel has had many changes to its interior over the last one hundred years. The original interior contained a side altar and large statuary consistent with Victorian times. In the 1980s the marble floor was extended and the altar rails removed as well as the Gothic framing

In 1919 the Luttrell Brothers build a large stone convent designed by S.S. Guthrie to abut onto the chapel. The design harmonised well with the building and an adjacent wing mirrored the rose window of the chapel. The chapel could now be accessed internally from the convent. The next door house built by George White in 1898 would be purchased by the sisters in 1942 for a primary college and a high school was built behind the convent as well. The 1950s and 60s were a time of considerable growth for the schools on this site and the convent became a very important centre for the Sisters of Mercy in the South Island.

However after the Sisters of Mercy left their Colombo Street property in 1993 the chapel became the sole surviving building on the site and was scheduled for demolition. Miraculously despite being abandoned for fourteen years, the stained glass windows were still in reasonable shape. Following an initiative by the Parks Unit, the then Projects and Properties Committee of the Christchurch City Council purchased the building and its environs in 1994, recognising its heritage and cultural value and extensive strengthening and restoration was undertaken. In 1996 the Rose Historic Chapel Trust was formed to work alongside the Christchurch City Council and facilitate the use of the building in a modern way as a cultural events and weddings venue.

The Trust managed the building very successfully for ten years and the building became known and enjoyed by many Cantabrians. Unfortunately the 2011 earthquake struck three days before the Trust planned to celebrate the centenary of the chapel. The chapel was extensively damaged with both the front feature window and the rose wheel falling in and the spiral staircase collapsing.

On 25th July 2018 after three years exhaustive and challenging restoration the Rose Historic Chapel, now looking better than ever was opened by the Mayor Ms Lianne Dalziel and a new page of its history has been turned.